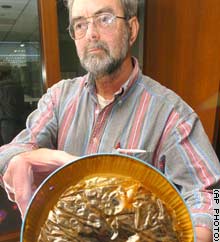 WAKISHA, Wisconsin (AP) — In 1962, Lance Nesta did what many people do when receiving a fruitcake: He set it aside.

He rediscovered it more than 43 years later in his mother’s attic. Nesta couldn’t resist taking a peek at the cake, still in its original tin and wrapped in paper.

“I was amazed that it hadn’t changed at all,” he said.
His two aunts sent him the fruitcake in November 1962 while he was stationed in Alaska with the Army, he said.

“I opened it up and didn’t know what to do with it,” Nesta said.”I sure wasn’t going to eat it, and I liked my fellow soldiers too much to share it with them.”

As best he can remember, he packed the cake with the rest of his belongings and shipped it home to Waukesha, Wisconsin, when he left the military a few years later.

He recently rediscovered it.

The cake arrived wrapped in brown paper with a red “fragile, handle with care” sticker on it. The cake itself was contained in a round blue tin printed with the words “Old Fashioned Fruitcake.”

Left handed, Gemini Baby Boomer, circa 1955. Loved Mickey Mouse, Motown and being my own personal United Nations. I miss watching Grade B Sci-Fi, eating those big crunchy dill pickles out of a jar and swooning over some long forgotten star. The one thing I know for sure... we've got to laugh. I've waited a long time to cultivate my graying hair and be able to call someone "sunny boy".